Manny Esguerra-Rossiter loves music. So much so that when the owners of the Chatham music shop he worked in retired, he decided to take it on. Thus Sound and Image is now Manny’s Music Shop, with a major refit underway. 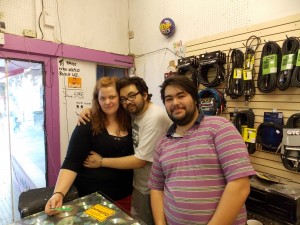 Chrissie, Manny and friend Luke on their re-opening day

The newly formed business between him and partner Chrissie will oversee the transformation of the shop into a music hub for Medway. Chrissie says: “As well as selling the usual vinyl, CDs and instruments, we’ve plans for restringing and refurbishing guitars, and guitar set-ups, as well as  merchandise – we want to keep it varied and interesting but will still be selling the usual accessories, like speaker leads and instrument cables.”

Manny added: “We’ve also got workshops planned, and in store lessons – and Lupen Crook’s next album launch will be here. We’re also getting together with local bands and promoters to publicise their music.”

The guitar room at Manny’s

One of those collaborations is already booked – Manny’s band Iron Iron and Frau Pouch are joining forces for a Halloween special on Friday 26th October at the Singapora Lounge. They’ll be known as Iron Frau and will be wearing Halloween themed costumes. Manny says: “This is a one-night only offer – don’t miss it!”

The shop is being refitted at the moment and will be full of quirky music related posters and decor. There’s still a lot to unpack but they’re open as usual and business is brisk. Manny knows his stuff; he’s enthusiastic and helpful; each customer gets his undivided attention. 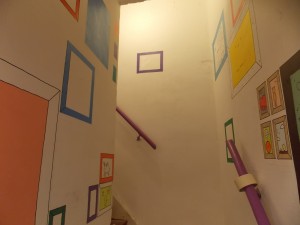 The stairwell at Manny’s Music Shop

Local illustrator Ben Cameron, whose work has recently gone viral, is putting his personal mark on the stairwell of the shop, with a selection of his own doodles and also – for a £1 donation to charity – your mark too, be it your name, logo or group. Ben said: “It’s an ongoing project with the intention of adding new work every week. A fun and lively installation, it will also include commissioned pieces funded by charitable donations, with regular pictorial updates on my website, strangepaul.com.” You can contact him via [email protected] if you’d like to contribute. 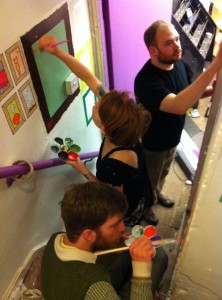 Manny and Chrissie want the shop to feel homely and comfortable, making it a unique and personal experience you’ll want to come back to. Manny says: “We want to become a music hub for the south east. We live and breathe music, we love it, and we want to be here for all genres of the music loving community, to create a buzz and keep it going.”